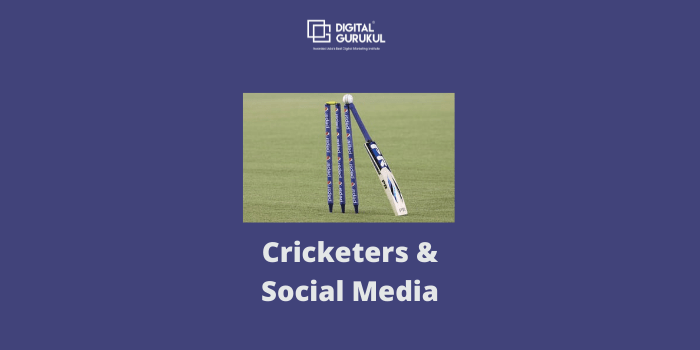 Here’s a list of the Top 5 Indian Cricketers who rule social media.

The inception of Social Media has facilitated people to follow their idols and favorite personality on different platforms. Now you can literally interact with your favorite personalities on Facebook, Twitter, Instagram, and other different platforms, and if you are lucky then you may even get a reply from them. These Cricketers are literally the hero of Digital marketing.

This article is dedicated to 5 Indian cricketers who rule social media and influencing millions of Indians. As an Indian, you must be familiar with the love and passion people possess for Cricket and Cricketers. Cricketers compete equally with Bollywood stars in terms of Brand endorsements. Many cricketers promote brands through their social media as millions of people follow them and these cricketers have an immense influence on millions of people. Big brands leverage cricketer’s influence on people by associating their brand with them.

For instance, according to ‘Duff & Phelps’, the brand value of Virat Kohli was $237.7 million in 2020 which is even more than any Bollywood celebrity.

I know you have already guessed his name, the flamboyant Indian Cricket team captain ‘Virat Kohli’. No one can match his popularity today, even no Bollywood superstar is near him in terms of popularity.  He holds the top position in this list of cricketers who rule social media.

Known as “Run Machine Kohli”, as mentioned above he holds the top ranking in India in terms of brand value which stands at a staggering  $237.7 million dollar.

He is not only scoring runs on-field but also ruling off-field on many parameters like in terms of the social media following and popularity.

The Indian Captain has around 154 million followers on Instagram as of September 2021, 43.6 million followers on Twitter, and 48 million on Facebook. He promotes many brands on Social Media like Puma, Audi India, Myntra, Wrogn, Digit Insurance, MPL, and a plethora of brands.

He is regarded as the “God of Cricket”. No one can match the respect this player has earned in his career with his calm attitude and cricketing performance. His popularity is not only limited to India but he is a world-renowned sports player. If you ask any 80s or 90s person about their favorite cricketer then maybe 99 percent chances are you will hear the name, ‘Sachin Tendulkar’.

Famously known as “Master Blaster”, many people know about his cricket career but simultaneously he is ruling the social media world. He is known for sharing positive, inspiring, sports-related content on his social media profile which portrays his personality as a trustworthy and optimistic man. Brands associate him with their product in order to gain the trust of people.

After retiring from the first innings of his life, Sachin refers to his second innings of life as ‘Digital innings’. He launched a youtube channel after his retirement in 2013 and further in he launched an app ‘100 MB’.

No doubt the ‘Hitman” comes to no. 3 on this list, he is really a gamechanger. Not only scoring 200s on the ground but also off the field he is one of the most admired men.

He actively uses social media where he shares glimpses of his personal life with his wife Ritika, Daughter Samaria, and friends.

He is the vice-captain of the Indian Cricket Team and captain of the IPL franchise “Mumbai Indians”. His popularity reaches new heights when his IPL team won 5 titles.

Rohit Sharma enjoys a following of  20.4 million people on Instagram, 19.3 million on Twitter, and 20 million on Facebook. He promotes many brands on his social media like Adidas India, Mastercard, Nippo India, Finance peer, and his portfolio has many brands.

Hardik Pandya is the most stylish Indian cricket player,  he is well known for his modern and fashionable lifestyle. He is very popular on social media among youth because of his aggressive gameplay.

Hardik has a huge following base on social media, 19.3 million on Instagram, 7 million on Twitter, and around 10 million followers on Facebook aggregating a combined following of 36.3 million.

He shares workout videos with his fans and photos with his wife Natasa and son Agastya on his social media profile. Even Hardik announced his engagement with Natasa Stankovic through his Instagram handle.

Monster Energy, Evolut Wellness, Sin Denim, Boat-Lifestyle are some of the brands he promotes and on his social media.

If social media was ubiquitous 10 or 12  years ago, then this guy would single-handedly rule the whole social media and digital world. Even after retiring from international cricket, he is still very popular among Indians. He holds the fifth position in this list of cricketers who rule social media.

He was the Man of the tournament of the 2011 ICC WorldCup in which India won the tournament. Though he had retired from the Indian cricket team, still today he is a recognized face in the country with a huge following base on social media.

Yuvraj promotes various brands like Lifebuoy India, Howzat, Wellversed Health, Aakash Digital, balle.baazi on his social media profile as he enjoys a huge following base on social media. He also promotes “youwecan” a foundation he created for helping cancer patients.